My weekend started early on Thursday evening after work since I had Good Friday off as a paid holiday.  Noah finished up a 2-day conference for work on Thursday so I met him and some of his co-workers in East Lansing at HopCat for happy hour.  I told Noah a couple weeks ago that I wasn’t going to be drinking any more alcohol or eating “bad” food until after the half marathon on the 27th. Well I’m operating at about 50% success on this self-imposed restriction…I had a couple of hard ciders at dinner on Thursday, but I ate this delicious spinach salad (with apples, pecans, raisins, blue cheese, chicken, and raspberry vinaigrette).  I suppose this is a slightly healthier food choice than the Loaded Crack Fries (deliciously seasoned french fries with cheese sauce, bacon, and jalapenos) I could’ve had…

Then on Friday morning, my parents came up from Adrian and we headed back to East Lansing to go to the Broad Art Museum.  This contemporary art museum has been open since November 2012, but Noah and I just haven’t made it there. The architecture of the building is awesome. 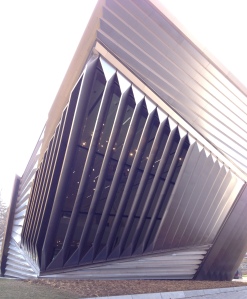 Unfortunately, the main floor of the museum was closed for installation, so we didn’t get to see too much, but admission is free so we’ll definitely go back when the entire museum is open. 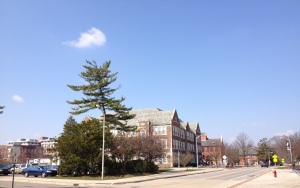 It was a gorgeous day to wander around East Lansing and we ate lunch at Five Guys – so french fries and a burger for lunch.  Again, not the healthiest choice, but oh so tasty.

Saturday I woke up early (well, a normal time for me – around 7) and finished the birthday cake for our nephew (see below 🙂 ) And then set about to making breakfast for Noah and I.  We tried out this new flavored coffee we picked up at the grocery last weekend. A Michigan coffee roaster, Leelanau Coffee, and their Snicker Cookie flavor.  Very cinnamon-y!

We were going to have omelets for breakfast – and Noah did because he used our skillet that is the perfect size for omelets – but I ended up with this veggie and cheese scramble instead.  Equally as delicious though – filled with spinach, bell pepper, carrots, and a little shredded cheese. 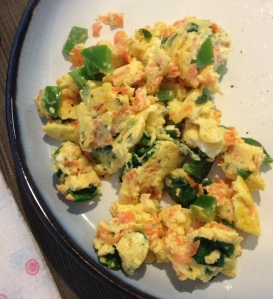 Saturday afternoon we went for a 5 mile run.  The weather was gorgeous, I got to use my new GPS watch and wear my new sport sunglasses, but those were the highlights of the run.  It was rough going for both Noah and I.  I was having some hip pain and Noah was overdressed for the warmer Spring weather. No matter, I guess as we made it through and on to the next one.

Then we headed over to Noah’s sister’s house for our nephew, Ryan’s 7th birthday party. Here’s the birthday boy!

And his birthday cake! I was originally going to do a Yu-Gi-Oh cake, but as I’ve mentioned before I am not the most artistically inclined so I was getting frustrated and stressed about how I was going to pull that off.  A last minute change was made to put together this shark cake instead. Ryan’s into sharks right now and this proved to be a much simpler design than what I was going to do for the Yu-Gi-Oh cake.  All in all I was fairly happy with the way this cake turned out.

On tap for today – watching a couple episodes of Cosmos, then going for a hike in a little bit.  It’s supposed to be in the 70s today and it looks sunny and gorgeous outside!  Also making homemade hummus (from dried chickpeas!) and grilling up some steaks for dinner later.