So my day yesterday was spent at work then going to the eye doctor – I’ll be getting new everyday glasses and a pair of sport glasses for running (super excited for those!), then I came home and got started on these little gems… 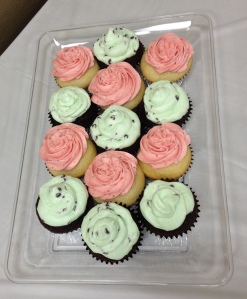 These were for a wedding shower at work and the reports from the folks who ate some said they were tasty.  I also made s’mores rice krispie treats, but didn’t get a pic and wasn’t super happy with the way those turned out.  I did get to use my kitchen torch though so that was super fun.

All the cupcakery caused me to only get 6 hours of sleep last night, so now it’s catching up with me.  After a discussion at work today about how much we love books, I was inspired to go to the library and look for some good reads.  I haven’t been in a while so I was pleased that they had one of the books I was really looking for – Jack Reacher, anyone? I can’t get enough of those books.  I also got books by James Patterson and David Baldacci – two of my fave authors.  And This is How You Lose Her by Junot Diaz, which I’ve seen on some must read lists so I’m looking forward to that one as well.

That’s all for now….biggest decision for my evening is whether to get started on reading my new books or catch some more episodes of Sons of Anarchy – decisions, decisions.

And tomorrow is my Friday! I took Friday off work so I can attend my cousin’s quiz bowl tournament. Looking forward to some trivia and a day off for sure!